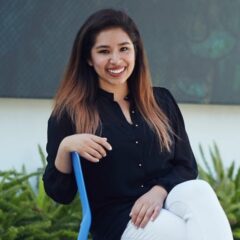 “I loved animation when I was a child, and I must admit that when I saw the Disney movies Pocahontas for the first time i thought that it was my everything”, recalls the 31-year-old creative. “I still remember being so excited to meet [actress] Irene Bedard at one of our pow-wows. It was great to have that representation, but as I got older, I realized that the source material for that story wasn’t that great and the true story of Pocahontas is really heartbreaking. That’s when I realized that I had to work to make that change and for true representation to happen.”

Valencia praises the show’s producer, children’s television pioneer Chris Nee, with whom he first worked as an assistant writer on Dr. toys and later as a writer in Vampirina. “After Chris left for Netflix, I wrote a two-page document on my computer, which became the basis for spirit rangers“, remember. “She was very nervous because she didn’t know who to introduce it to and it meant a lot to me. Chris was at the top of my list because even though he’s not indigenous, he knows what it feels like to be different and not be seen on screen. So I went to visit her at her new job at Netflix. We were having lunch and she asked me if I had something to propose, so I sent her my idea and literally the next morning, she emailed me and said, ‘I’m going to buy this and we’re going to pitch it to Netflix! ‘”

Before long, the show was greenlit by the streamer and Valencia was able to put together a writers room made up entirely of native writers. The show’s beautifully produced CG animation is done by Paris-based studio Superprod (paddington, batwheels). “Everyone got a Native American history class that they never asked for,” jokes Valencia. “We all learned a lot, and everyone has gone above and beyond to make sure every detail, every tribal print, every image is correct. They really put their hearts into it.”

She says that before working on Dr. toys, did not realize the breadth of stories one could tackle in children’s animation. “I remember it was my first day on the job and I read the script for ‘Hannah the Brave,’ which is about cancer,” she recalls. “I just didn’t know that was something that could be done in the preschool space. I loved the way Chris respects his audience and knows that they deserve these kinds of big stories.”

Valencia, who spent her childhood in California shuttling back and forth between a Chumash reservation in the Santa Ynez Valley and her home in San Diego, hopes to bring the same kind of depth and authenticity to her new show. spirit rangers explores the adventure and beauty of nature through the eyes of three Chumash/Cowlitz brothers who transform into special spirit animals to save the national park where they work and live.

Many parts of the show resonate with her and her own upbringing. “I had gone to a bear ceremony for my tribe; we honor the bear every season, our dancers don their bear skins. The central character of the series, Kodi, came to life for me, and then I added the other characters,” she recalls. “I also thought that a national park was a perfect setting. My dad and I loved to hike Santa Ana. I thought she was crazy that we would never meet an indigenous park ranger, because we are the original caretakers of this land.”

For Valencia, one of the most important goals of the program was to have an entirely native writing team. “I’m not ‘Native Queen’ by any means, and I really wanted multiple perspectives of our culture,” she explains. “It has been a pleasure learning about all the tribes from different corners of the country. Some of our stories are very similar and some of our stories are really different, but that’s one of the strengths of the show. As a little Chumash girl, I am also very proud to show off the tribes of California. We have never been represented like this. At the same time, I am also excited to show native children in a modern space. Kodi and her family don’t wear leather or feathers. They are happy friends, they love to go on adventures and use modern technologies.”

Looking back, the young creator of the show says she put a lot of pressure on herself. “This is the first animated native show created by a native team,” she notes. “But I realized that this will not be the last. There will be other shows and they will be better next time, and we will keep moving forward. Another big step was that even though the show is set in a Southern California park, it acts as a magical center for spirits from all over the world, so we get to involve a lot of different tribes. We went to consultants and elders and made sure we were doing its colors, designs and symbols justice. Everything had to go through the right channels to make sure everything was accurate.”

One thing Valencia has learned is that sticking to your guns and demanding a lot from your team can yield golden results. “Let’s take as an example what happened with one of our voice actors,” she says. “I really wanted the young actor [Wačíŋyeya Iwáš’aka Yracheta] who gives voice to one of our protagonists (Kodi) to be in the program”, says Valencia. “He sounded so cute, like a bear cub, but he lived in the middle of nowhere in South Dakota, about a two-hour drive through the snow from the nearest studio. Netflix could have easily said, ‘No, this is too hard’ and cast someone else. But it was exactly the opposite. They built his own recording studio for him and then sent it to him so he could walk to work. He now he is a very talented hardworking actor. So I’m glad I was able to hold my own, and it was amazing to see Netflix match that and see my team go above and beyond.”

When asked about today’s Hollywood, where thoughtful and honest stories about the Native American experience are finally seeing the light of day, Valencia says she’s so proud to be a part of this new chapter. “Hollywood has been obsessed with native cultures but we hadn’t been invited to be a part of that until recently,” she says. “I am amazed that we have gone so long without seeing this in entertainment and I am very happy that it is happening now. And hopefully, it will be even better for the next generation.”