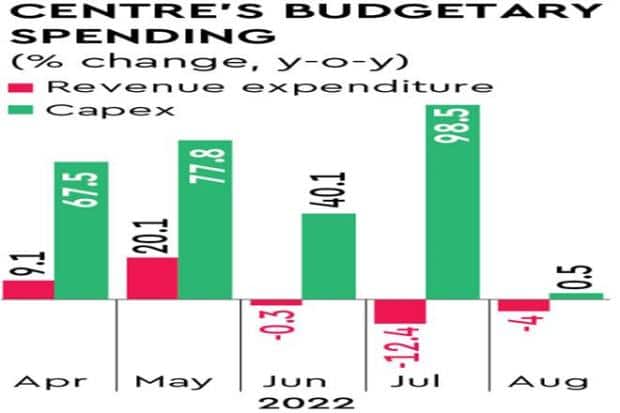 As the Finance Ministry prepares to hold consultations with various ministries from Monday to confirm revised budget estimates for FY23, it will intensify focus on the prudent use of funds by departments to ensure there is a growth slowdown anticipated in the second half of this year. The fiscal side is no longer hampered by undue fiscal stinginess.

In the first half of this fiscal year, given strong external headwinds, the government emphasized keeping revenue waste at bay, generating savings wherever possible and pushing states to free up funds for agencies implementing various schemes.

Now the focus is shifting from saving for a rainy day to ensuring more prudent and effective spending, an official source told FE.

“When resources are limited, you have to use them for more productive purposes and at the most opportune time, and that will be the focus,” he said. He was responding to a query about the possibility of a slowdown in the tax cleanup in the second half. “So there will be even tighter control on spending, especially now on revenue spending.”

Also read: Growth below 7% may be a reality for now: Chief Economic Adviser V Anantha Nageswaran

With growth expected to slow further in the second half amid external headwinds and tightening interest rates, the government wanted to preserve its fiscal clout in the first half, the official said. The Center’s fiscal deficit, therefore, reached just 32.6% of the FY23 target through August. While slightly higher than the 31.1% deficit recorded a year ago, spending in the first half of the last fiscal year was hampered by the second wave of Covid.

The World Bank has cut its FY23 growth forecast for India to just 6.5% from 7.5% forecast in June. On Friday, Chief Economic Adviser V Anantha Nageswaran stated that India may have to live with growth below 7% in the short term.

Thanks to a spike in commodity prices in the wake of the Ukraine war and its attempt to ensure food security for vulnerable sectors, the government has taken on an additional burden of over Rs 2.4 trillion (mainly for food and fertilizer subsidies) this fiscal year. Also, around Rs 20,000 crore extra can be provided for LPG subsidy. According to an ICRA estimate, the government may exceed its FY23 budgeted fiscal deficit target of Rs 5.42 trillion (or 6.4% of GDP) by Rs 1 trillion.

The government, however, aims to bring the fiscal deficit under control within the target of 6.4% of GDP for fiscal year 23, the official quoted above said. This means that the Center is unlikely to adopt an expansionary fiscal policy in the second half, despite growth concerns.

While year-on-year growth in capex remains high at 47%, compared to the required rate of 27% to meet the annual target, capex has averaged around Rs 50 billion per month in the last few years. first five months, below what is required. monthly average of Rs 62,500 crore to meet FY23 BE. However, top finance ministry sources have already claimed that capital spending will not be cut and the FY23 target will be met.

The Centre’s tax revenue has slowed considerably in August, with post-refund gross receipts for the month at Rs 1.51 trillion, down 8% from the same period a year earlier.

However, in a bid to calm the bond market, the central government has decided to cut its gross market borrowing target for the second half of this fiscal year by Rs 10 billion. However, official sources indicated that the government could resort more aggressively to the National Small Savings Funds to finance part of its fiscal deficit, should there be a pressing need.