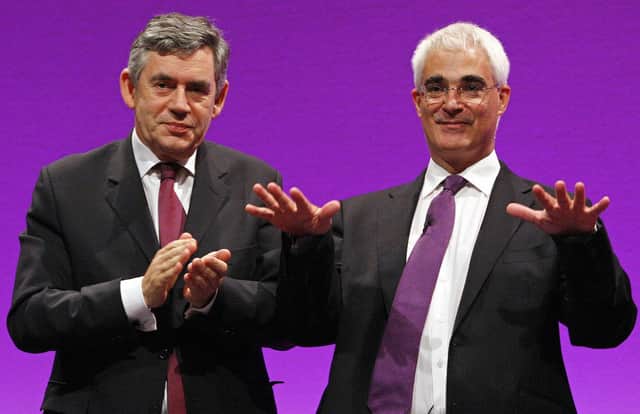 Alastair Darling receives applause from Prime Minister Gordon Brown after delivering his speech during the 2008 Labor Party Conference in Manchester.

What became clear with inflation above the five percent wage limit and a very harsh winter, is how crucial bakers, truckers, nurses, garbage collectors, fire service were among the key workers during the recent Covid 19 pandemic. They were probably undervalued then and nothing seems to have changed over time.

Except we have a government that seems to ignore the lessons of history in both 1978 and 1979 and, more recently, in the banking crisis of 2008.

Chancellor of the Exchequer during the 2008 banking crisis, Alistair Darling, who was also a leading figure in the Better Together campaign, must be wondering what the Conservative and Unionist parties will do to help the cause of Scottish independence.

Boris Johnson MP as Prime Minister, next MP Liz Truss as Prime Minister and a Chancellor of the Exchequer who perhaps should have stayed with University Challenge rather than the challenges of solving the economy.

If you wanted to address the problems in the economy, maybe raising the minimum wage, lowering the base tax rate and raising tax thresholds seems to me, as someone who delivers food for a living, a much better way to put money in the pockets of people, but then again, I’m not an economist.

Apparently, I am also a nationalist and people like me are not supposed to understand anything about economics.

I thought the Conservative Unionist Party was supposed to be great on the Union, the economy, law and order, but it certainly doesn’t seem that way at the moment.

Unionists misrepresent the SNP’s policy on currency, which is to establish a central bank and Scottish currency at the earliest fiscally prudent opportunity after independence.

And also about the findings of the Commission on Sustainable Growth, whose author Andrew Wilson wrote in May that “if Scotland votes to be independent, it will be the richest country to do so. The economics of the independence debate begins with this plain and simple fact.”

He continued: “The Scots have the choice of independence and return to the European Union. Not choosing that would be financially high risk. The process will not be easy; It will be hard work and effort, but like most acts of self-improvement, it will also be satisfying and meaningful.” And he concludes: “Of course it will be a challenge, but it will be worth it.”

As a net exporter of electricity, oil and gas, an independent energy-rich Scotland in the EU is more likely to experience an influx of financial services, as happened in Ireland after Brexit, while existing banks and financial services companies would have to register in Scotland in order to continue operating here.

Without Scotland’s vast energy resources, Ireland’s debt to GDP ratio is 54% compared to the UK’s 96.6% and, as a country with a £6bn budget surplus, Ireland can ask borrowed on international markets at a cheaper interest rate than the UK, which is facing long-term austerity outside the EU and with a national debt of £2.74 trillion.

It can be argued that an independent Scotland would not be responsible for a share of UK debt without a prorated share of UK global assets and if we tax oil and gas companies at Norwegian levels there should be no deficit.

The Scottish editorial of October 8 (‘This is not the way to save the planet’) highlights the problem of a green transition when not all factors are addressed.

It is claimed that ‘Scotland needs to cut fossil fuel production’ when, in The Scotsman on 5 October, an article by Ashley Kelty points out that during the summer heat wave, wind turbines failed to come to the fore and did not meet system demand due to an anticyclone over Europe.

Only the importation of electricity from English gas-fired power stations saved Scottish schools, hospitals and medical centers from lights going out by the failure of a design from the Middle Ages!

What the editorial did not mention either is the proposed construction of a 900MW gas-fired plant in Peterhead that will remain operational until 2080 or the proposed power source for the plant.

As this brings the total capacity of the site to 3300MW, it is in demand for a lot of gas over the next 50 years and as current oil and gas wells in the North Sea will be uneconomic by 2045, where will Peterhead go? ? get supplies if there is a ban on further exploration in UK waters?

The truth is that not a single one of the questions detailed above will be addressed at the SNP conference in Aberdeen. Just like the five resignations from the Scottish Covid investigation, everything will be ignored by all delegates attending the SNP conference!

In the old days, when sailors saw rats jump off the ship, they reached for their life belts.

When I read about Jacob Rees-Mogg’s business partner, Dominic Johnson, a wealthy financier who has donated over £300,000 to the Conservative Party, being appointed Minister of State and a Peer, I realized that the big Conservatives see disaster ahead. and they are getting ready. for it.

Naturally, Rees-Mogg has an unpaid partnership in Somerset Capital Management, which he co-founded with Johnson. Now the business is apparently up for sale and possibly making millions of ponds for both owners.

When the great Tories in Westminster are feathering their nests for a long, long time in opposition, what the actors call “rest”, it is a serious moment for the Scottish Tories to consider whether they would not rather participate in the construction of a new Scotland than sink. under the waves of political oblivion in a sinking United Kingdom.

I’m sure the ‘Scottish Conservatives for Independence’ would be welcome guests at the SNP conference.

A little advice to the Countess and Earl of Wemyss and March for their audacious attempt to sue art dealer Simon Dickinson because the painting they sold him for £1m he sold for £10m after a thorough cleaning. world, if someone goes to the trouble of restoring second-hand goods to market condition, their value increases. That is the fair fruit of his work.

If you neglect to take care of your property, you are not entitled to future sale compensation, no matter how many titles you have: art is not like an apprentice soccer player. By the way, the vast majority of the sane population wouldn’t give. It’s twopence anyway for Jean-Baptiste-Simeon Chardin’s “Le Benedicite”: a sad little piece that has nothing to do with Charles Charles’ “Dorothy Walpole.” Jervas (1710) or a Scottie Wilson at his best.

Many of those who live in Scotland are forced to seek private medical and dental treatment, most of whom cannot afford it.

These people have been paying National Insurance and taxes for many years.

Upstairs will jump the Prime Minister and her loyal supporters who will quote “It’s much worse in England.”

That is irrelevant as the NHS has been devolved since July 1, 1999 and the SNP has controlled Scotland’s devolved legislature since the 2007 election.

Taxation is a delegated issue, so the statements of Nicola Sturgeon, famous for her “Where Scotland leads, others will follow”, could gain ground in Westminster and announce that those forced to go to private doctors and dentists for treatment will be able to claim a tax relief at 21 percent

With World Mental Health Day next week (October 20), suicide prevention charity R;pple is calling on UK employers to do more to prioritize mental health and suicide as part of their health and safety policies.

R;pple’s research shows the stark disparity between the effect work can have on mental well-being versus the worrying lack of a suicide prevention policy and current mental health policy that is simply there to tick a box.

The latest findings from R;pple show that 1 in 4 employees in the UK have experienced suicidal thoughts at work. Of those surveyed in Aberdeen, only 28 per cent would feel comfortable talking to their line manager about potential mental health issues.

Therefore, R;pple is calling on companies to become more responsible and put as much energy into suicide prevention as they do into their fire escapes.

While fire drills and bailiffs are common practice in workplaces, and fire action signs have been a legal requirement since 2007, the UK, unlike many other countries, does not monitor, investigate, does not legally regulate or recognize work-related suicides, with a person 62 times more likely to die by suicide (1 in 88) than in a fire (1 in 5,447).

With 75.5 per cent of 16-64-year-olds employed in the UK as of August and an ongoing cost of living crisis affecting us all, the simple fact is that employers must do more to protect the mental well-being and safety of your staff.

Of course, it would be a mistake to pin the sole responsibility for mental health and suicide on the doorstep of every workplace, but given that the average full-time workweek comprises more than 35 hours, it is reasonable to expect employers to take action to prevent potentially fatal deaths. results for your staff.

Suicide can be prevented; employers must do more to ensure that this is the case.

We welcome your thoughts. write to [email protected] including name, address and phone number; we will not print all the details. Keep letters under 300 words, with no attachments, and avoid ‘Letters to the Editor/Letters from Readers’ or the like in your subject line. Do not send letters filed elsewhere. If referring to an article, include date, page number, and heading.