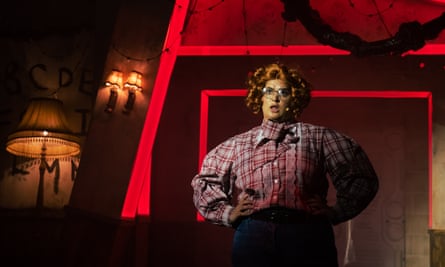 meIt’s got a pulsing synth soundtrack and it gave Kate Bush a late No. 1, so why not make Stranger Things a musical? With nosebleed shrill notes, a scary wig box, and a dancing Demogorgon, this spoof of the Netflix hit helpfully revamps the events of mostly the first series.

Despite the songs and inside jokes, the lush production rarely gives the source material an extra dimension. One exception is a delusional scene that imagines Winona Ryder breaking out of character as Joyce Byers, accompanied by a chorus from her ’80s movies, including Edward Scissorhands and a mallet-wielding bad girl from Heathers, and spitting fury at not win an Emmy. .

You will be lost if you have never seen the TV show. Justin Williams’ set is a faithful recreation of Joyce’s house: fairy lights, an AZ scrawled on the wall, and a gross tendril wrapped around it. In the background are the lab-style doors of Hawkins and the opening scene of the series, with that sweaty scientist running to the elevator, kicks off the evening.

Annoying Will Byers is amusingly played by a deadpan-faced puppet, Holly Sumpton is a suitably edgy Joyce, and Howard Jenkins’ Hopper has an unnerving compulsion to rip up verses from Dear Evan Hansen. The cast lunges at him in Ellis Kerkhoven’s staging, but too often Jonathan Hogue’s script is flat, his lyrics rarely bolstered by his score that mixes moody synths with smooth ballads. The story puts the spotlight on Barb (Georgia McElwee), but there’s little barb in the humor; instead, we get hackneyed jokes about horror clichés, random references to ’80s pop culture, and a mild interrogation of the show’s (and era’s) sexual politics.

Before its bloated recent episodes, Stranger Things was already self-aware, even the cast of the main adult roles were references to the ’80s, and its selection of gadgets, songs, and fashions from that decade were done with an affection and a humor that makes it difficult to imitate. . The show itself is an homage to ’80s horror: with this affectionate parody that often turns into a tribute, it ends up being an homage to an homage.

Richard Marsh’s Yippee Ki Yay, a parody of Die Hard in rhyming couplets, managed to both honor and mock the original while deciphering the reasons for its popularity. The stranger sings! it’s well suited to underground vaults, but this baggy, often oddly unadventurous musical needed more time in the lab.