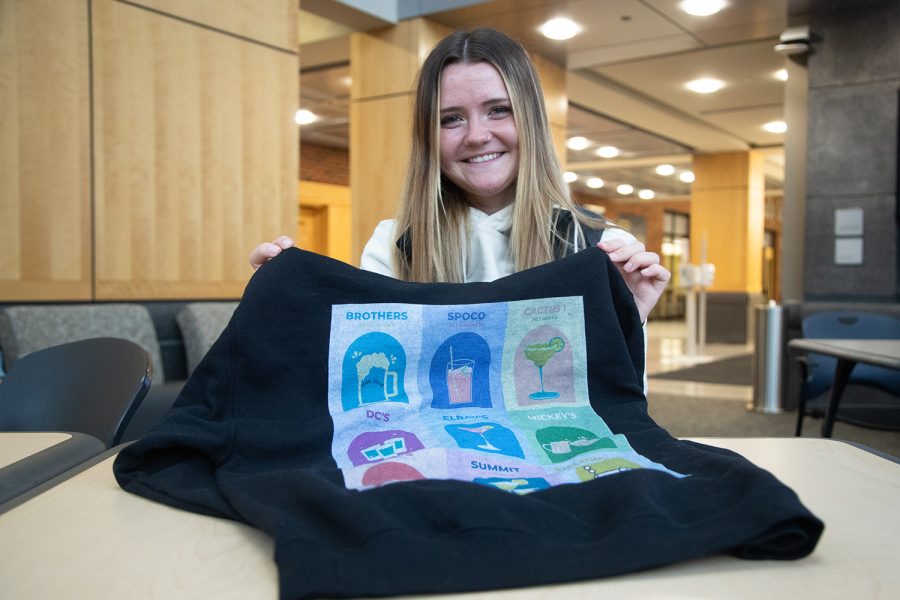 In the Business Finance class at the University of Iowa, students are taught how to start a small business and manage finances through a product sales project called “$20 Startup.” Students in this class took it upon themselves to donate part of their proceeds to the University of Iowa Stead Family Children’s Hospital.

Business Finance student Isabelle Willey poses in a sweatshirt her group designed and made for a class project in Iowa City on Tuesday, Oct. 4, 2022.

What started as an innovative class project turned into a fundraiser for the University of Iowa Stead Family Children’s Hospital.

Bob Walker, instructional associate professor at Tippie College of Business, has taught the Business Finance class for about five years.

In this class, students participate in a project titled “$20 Startup” where groups of four or five students invest $3 and Walker invests $5 in their new small businesses. For the next five weeks, groups are challenged to advertise, create, and sell their product with the goal of earning the most money in the class.

In the fall class of 2021, a group began selling their product, water bottles, outside of Hawkeye football games. The group decided to announce that they would donate part of their profits to the children’s hospital and were surprised by the result. Walker called the students’ idea of ​​donating proceeds from the project purely voluntary.

Walker explained that it was his Business Finance class that inspired former Hawkeye center Tyler Linderbaum to donate the $30,000 clothing fundraiser bearing his name, image and likeness to the hospital last December.

“I am impressed with the students and their creativity in what they do,” said Walker. “It’s a lot of fun for me.”

The group’s decision to donate their money restored Walker’s faith in his students, he said. She estimated that groups from the fall class of 2022 donated $1,200 to the children’s hospital.

As an incentive, Walker gives extra credit to the team that earns the most money. This semester, those coveted points went to a group selling UI and Iowa City-themed glass cans, glasses made of glass shaped like cans.

Ava Parris, a senior majoring in business administration with a minor in American Sign Language, decided to keep creating glass cans after searching TikTok for ideas. She thought the social media platform would be a great way to find out what’s popular.

“I think it was a great product to pick because it’s something you can create and it’s yours,” Parris said. “We just create our own designs and use them.”

Eli Anderson. a final year student of business analysis and information systems and business management, is also part of the group. He thought the only thing making the project difficult was the $20 budget. They had to settle on something cheap but desirable and unique.

After hearing Walker tell his class that previous students donated parts of the profits to the hospital, both students agreed that it was a no-brainer. Parris’s immediate thought was, “Why wouldn’t you?”

Over the course of five weeks, the group generated more than $1,700 in revenue and attributed their success to product choice. Some teams chose cheaper items like stickers or pens and sold them for $5-10, while choosing to sell sets of glass cans for $20.

“It was just the nature of every time we sell one, we’re making twice as much,” Anderson said. “That made it easy to generate our revenue a little bit faster than the rest of the people we compete with.”

Parris said they are still finalizing orders even though the project is over. The group has talked a lot about continuing with the small business, but they still need to set up a formal meeting and get a written agreement. Anderson also doesn’t see a reason to stop because the business is still booming and he wants to keep the momentum going.

Both students said their favorite part was getting firsthand experience running a business, doing everything from designing the images on the cans to printing and cutting them out. Despite being seniors in the entrepreneurship program, they had never been a part of anything like this before.

Isabelle Willey, a UI journalism student who received her business management certificate, said her group sold colorful and trendy packs of posters themed around bars in Iowa City. Wiley said that she was already planning to open a store in Esty herself, so the signs were designed and ready to go.

After selling the poster packs for a few weeks at $15 each, the group decided to add Iowa City-inspired hoodies to the store. The hoodies varied in color and had slogans such as “text me when you get to Kinnick” printed on them.

Willey’s team donated half of their small business proceeds to the hospital. They ended up making almost $300 selling their poster packs and sweatshirts and donating $140 to the children’s hospital. Throughout the class, Willey said she learned the ins and outs of marketing and managing finances.

“It was good to get a little insight into the cost of products, what you’re doing, how to price things and how to market your brand,” Willey said.

Over the past five years, Walker said she has received very positive feedback from students about this project. Her ultimate goal is to help students get out into the real world and practice what she teaches.